The need to consume less power and provide extended battery life is a critical part of today’s mobile devices. To meet the ever more aggressive power/battery life requirements in this new environment, the SATA interface is evolving. DevSleep is a new addition to the SATA specification, which enables SATA-based storage solutions to reach a new level of low power operation.

In the SATA spec, the host or device can place the interface (PHY) into reduced power states as follows:

The existing "in-band" SATA power management scheme means that the SATA PHY cannot be fully powered down; it must remain powered to process the state change commands. Thus, if a host wishes to save additional power on the SATA interface, then only two options exist:

With the addition of DevSleep, hosts/devices have a new power management option in which the host and device can completely power down their respective PHY’s and other link-related circuitry. Devices might also choose to power down additional sub-systems while in DevSleep, enabling even further power savings. However, the exit latency, and overall transition energy to/from DevSleep, is much lower compared to power off. 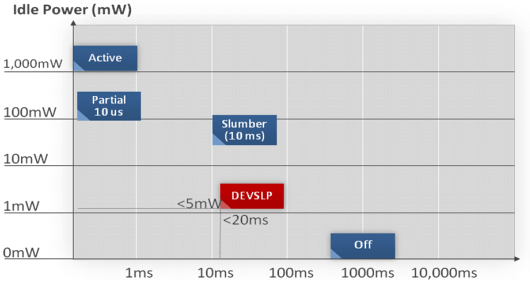 With DevSleep enabled, a host has a middle ground between today’s interface power management states (Partial and Slumber) and power off. It can now go into a low latency power mode where both the host and device PHY can be completely powered off, as well as possibly other sub-systems, but still maintain an exit latency much closer to Slumber than to a full shutdown. The DevSleep specification does not state what power levels a device will reach while in the DevSleep state, but SSDs are targeting 5mW or less.

The host may assert the DEVSLP signal from any state, provided that:

To meet the ever more aggressive power/battery life requirements of today’s mobile devices, the SATA interface is evolving with the addition of the DevSleep interface power state. DevSleep enables hosts and devices to completely shut down the SATA interface, saving more power vs. the existing Partial and Slumber interface power states, which require that the PHY be left powered. DevSleep will help to enable a new generation of power friendly SATA-based mobile devices.

Additionally, new power stringent systems will place an increased emphasis on the ability of the system and OS to completely power down storage devices and the storage controller during long periods of idleness. Implementing both DevSleep support on the platform provides for a hierarchical power management solution that allows the system to choose between power and latency in a dynamic and efficient manner.