Hard disk drive self-test is executed in a background mode without loading of the central processor unit. Since data is not transferred through interface cable, the internal self-test is the best way of analysis of hard drives showing the best result in speed in comparison with any programmatic methods. The duration of full diagnostics depends on hard drive capacity: at the average, the diagnostics take 1 hour. The HDD activity LED indicator doesn't light during its execution though the acoustic noise of disk activity occurs.

Internal autonomous hard drive tests are launched by standard ATA/ATAPI commands. They are intended for deep analysis of HDD mechanics and magnetic disks surface state. After the execution of the tests, the hard disk drive without fail refreshes S.M.A.R.T. indicators correspondingly to its current state. 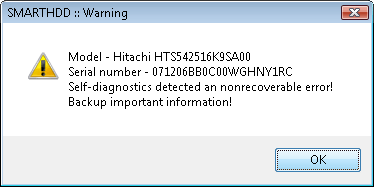 Fast self-test tests only electronic components and positioning system of the storage device that allows quickly to estimate their reliability: it takes 1 minute at average. Full self-test performs analysis of all HDD magnetic surfaces.