The duty of quality control of a magnetic surface of a hard disk drive is assigned to the operating system which makes a mark about unfitness of the cluster consisting of several sectors at bad sector detection, for further usage in a file system. With the appearance of S.M.A.R.T. technology, this responsibility was taken by the manufacturers of hard drives as well.

During the HDD operation, the magnetic surface can lose the ability to store the information owing to degaussing or mechanical damage. At the detection of a new bad sector, the disk drive electronics fixes this fact in S.M.A.R.T. and substitutes the physical location of the sector to a new one arranged in the data area that was reserved in advance for this case on a magnetic disk. This substitution is made in the translator. The logical address that is used for requests for data on the hard drive remains former. Such a method of cloaking of defects was given the name a "method of reassignment" (ReAssign) or a "method of modification of a sectors map" (ReMap). 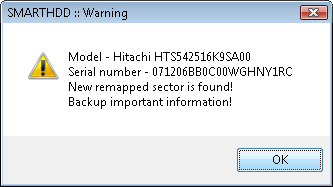 The leading causes of degradation of a magnetic surface is the heat of the disk drive causing "ageing" of a magnetic sputtering on a disk and promoting its spontaneous self-demagnetization, and mechanical damage of a magnetic surface by the smallest parts, penetrated in the hermetic block or created after the contact of magnetic heads with a magnetic surface of a disk. The most destructive effect is the impact contact of magnetic heads with a magnetic surface taking place when the disk is spun. It is caused by negligent use of the disk drive at which the beaten out particle possessing magnetic properties will require more time for its centrifugal force reset and being caught by the filter that increases the chance of repeated collision with the magnetic head; the linear velocity of the latter is more than 100 km/h. The vector of particle recoil directed to the rotation center also increases the risk of repeated collision. With its high kinetic energy produced when hitting the magnetic head, the particle can strike the magnetic surface, beating out another one. The process can become avalanche-like and to become the reason for the appearance of numerous bad sectors. Reading the information from these sectors is often impossible even using the technology of automatic correction.

Periodic starting up of the function of self-test realized by the manufacturers of hard disk drives enables to detect and correct existing and outlining defects of a magnetic surface before the information becomes unavailable to reading by moving it to a more reliable place on a magnetic disk. An automatic check of S.M.A.R.T. attributes of an HDD aimed at detecting the appearance of new defective sectors and made once a minute allows making a backup copy of the relevant information in proper time.